Very excited for this talk! Check out the abstract and bio below. 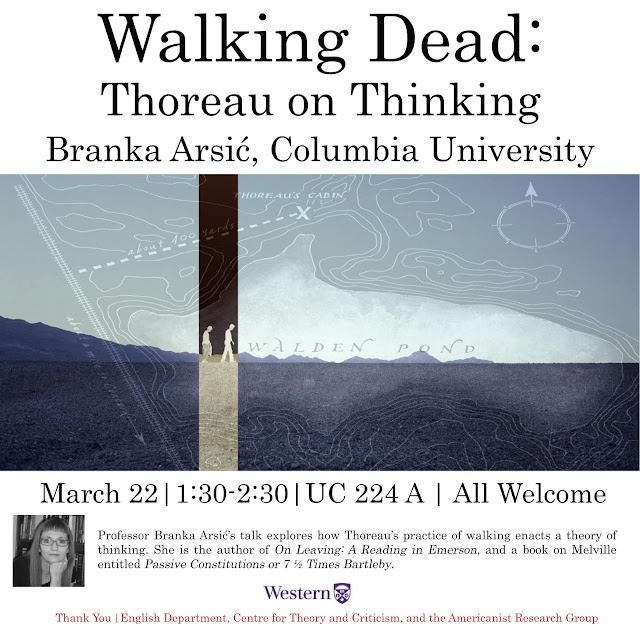 Abstract: My talk explores the practice of thinking Thoreau enacted through his walks. I argue that Thoreau’s walks differed in important ways from the famous examples of British romantics that found their most rigorous philosophical articulation in Kant’s “how to orient oneself in thinking.” Unlike Kant and the romantics, who walked so that they could find the self, gather their thoughts and even, like Wordsworth, compose poems, Thoreau walks to forget all of his thoughts; not to find but instead to lose himself completely, and “never to return.” I thus ask what kind of thought is predicated on such an injunction, or even desires disorientation, confusion, loss, fear and awe. In seeking to answer those questions I suggest that Thoreau's wish to experience radical impoverishment and to “lose himself completely” is predicated on the astonishing theory of dreams that he developed throughout his Journal, recording and then analyzing his own dreams about walking. By charting the complex dynamic of dreaming, sleeping and awakening that Thoreau outlines in recording his “walking dreams,” I attempt to reconstruct the relations between self-loss and self-awakening, migration and metamorphosis, forgetting and remembering that fashion the practice of thinking he hopes to achieve through walking.

Bio: Professor Branka Arsić is the author of On Leaving: A Reading in Emerson (Harvard UP, 2010), and a book on Melville entitled Passive Constitutions or 7 ½ Times Bartleby (Stanford UP, 2007). She has co-edited (with Cary Wolfe) a collection of essays on Emerson, entitled The Other Emerson: New Approaches, Divergent Paths (University of Minnesota Press, 2010). She has written on, among others, Anne Bradstreet, Mary Rowlandson, Jonathan Edwards, Ralph Waldo Emerson, Herman Melville, Henry David Thoreau, Stanley Cavell and on topics such as captivity, passivity, abandonment, impersonality, ordinary language philosophy and the ethics of leaving. Her articles and reviews have appeared in such journals as American Studies, Common Knowledge, Diacritics, ELH, New England Quarterly and Nineteenth-Century Prose. She is currently completing a book entitled Magical Life: Mourning and Vitalism in Thoreau, discussing the radical way in which Thoreau related mourning practices to biological life by articulating a complex theory of decay, and proposing a new understanding of the pathological. Her second project, Dream Faces: Life and the Formation of Persons in Melville, explores the astounding treatment of faces in Melville, how they are never presumed or simply observed, but instead emerge fleetingly or quickly disappear. By examining the question of the animal face via defacements of turtles, dogs and horses, the book will seek to reconstruct different strategies of facing or defacement of humans.

Email ThisBlogThis!Share to TwitterShare to FacebookShare to Pinterest
Do you buy the happy-go-lucky heteronormativity when it comes to meatlessness? Nonetheless, check this place out (h/t to RS): http://www.themeatlessmarket.com/ 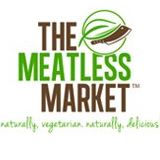 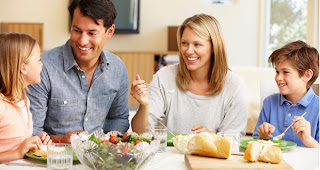 Posted by Unknown at 7:42 am No comments:

Come out to this if you can; it sounds great! We'll try to record it, too. 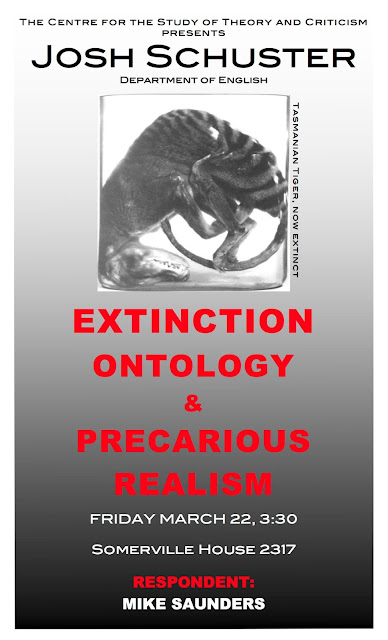 Posted by Unknown at 2:24 pm No comments:

I strolled across
An open field;
The sun was out;
Heat was happy.

This way! This way!
The wren's throat shimmered,
Either to other,
The blossoms sang.

The stones sang,
The little ones did,
And flowers jumped
Like small goats.

A ragged fringe
Of daisies waved;
I wasn't alone
In a grove of apples.

Far in the wood
A nestling sighed;
The dew loosened
It's morning smells.

I came where the river
Ran over stones:
My ears knew
An early joy.

And all the waters
Of all the streams
Sang in my veins
That summer day. 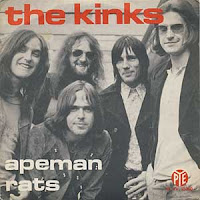 Watch out for Ray Davies' bow tie and the fetishized primitivism,
but listen for these amazing lines:


I think I'm so educated and I'm so civilized
'Cos I'm a strict vegetarian
But with the over-population and inflation and starvation
And the crazy politicians
I don't feel safe in this world no more
I don't want to die in a nuclear war
I want to sail away to a distant shore and make like an ape man
......
I  look out my window, but I can't see the sky
'Cos the air pollution is fogging up my eyes
I want to get out of this city alive
And make like an ape man

Email ThisBlogThis!Share to TwitterShare to FacebookShare to Pinterest
What a wonderfully weird find today; enjoy the sonorous flatulence of the bee's bottom:

THIS frail and fragrant morning
Is streaming on toward noon;
Listen to my warning!
There will be buzzing soon.
Soon we shall be shaken
Like flowers and gold grass
And all our pollen taken
By a bee with bowels of brass.

-Genevieve Taggard
Posted by Unknown at 11:33 am No comments:

http://www.ustream.tv/channel/undergroundecosat
Posted by Unknown at 5:58 am No comments: